The curators spoke about this project at the Collecting Geographies: Global Programming and the Museum of Modern Art organized by the Stedelijk Museum, Amsterdam, Netherlands. An essay they wrote about Manifesto is included in the Archive of Visual Arts Activism housed at the San Francisco Museum of Modern Art.

The people have spoken. They have put it in writing. They have created manifestos. Pitzer College Art Galleries has collected these works and put them on display in Manifesto: A Moderate Proposal, an exhibition of the ideas, wishes and demands of scores of citizens with something to say and a need to be heard. It is our current climate of discord that created Manifesto: A Moderate Proposal.

It was conceived to give these citizens a soapbox and to amplify their voices. These voices are many. These voices belong to inmates at sun-baked correctional facilities in Southern California and to cloistered scholars at elite colleges. 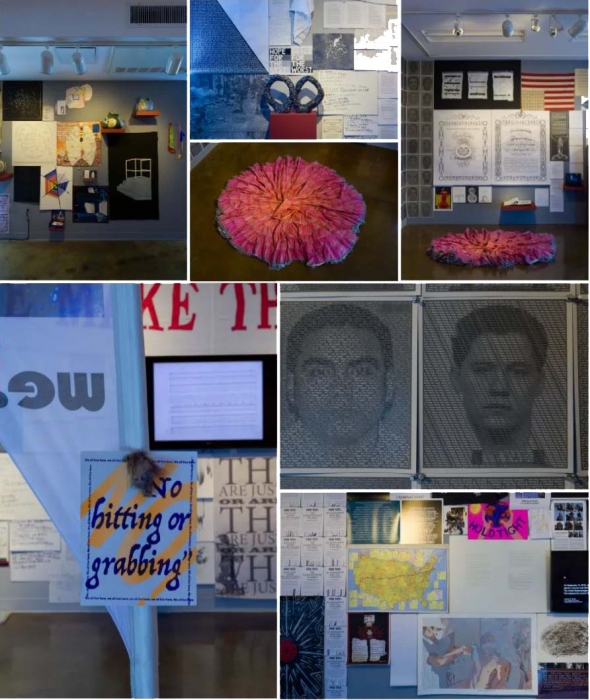 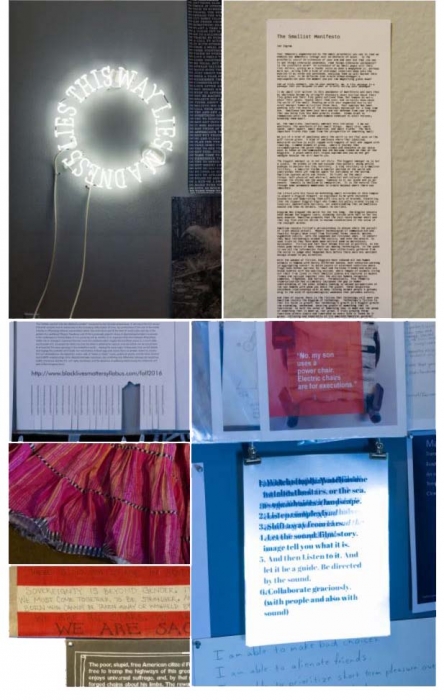 Their broad variety of concerns were harvested by a team of varied volunteers—Andrea Bowers, Olga Koumoundouros, Việt Lê, Ultra Red, Carlin Wing and Jenny Yurshansky—who collected manifestos that are printed on paper, painted on canvas, formed in neon, shot on video and carved in wood. 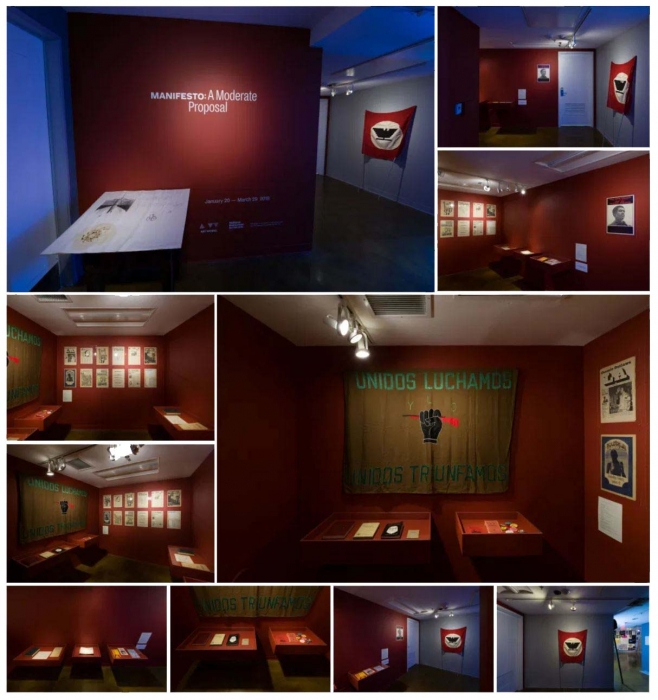 MANIFESTO: A Moderate Proposal is a multitude of opinions hung densely, floor-to-ceiling, in sections that reflect the numerous themes that include immigration, ableism, race, resistance, religion, gentrification, and related historic manifestos from The Claremont Colleges Library, Special Collections.

Panel: We Come from Your Future: Creating and Defending Community Against Gentrification
The anti-gentrification movement in Los Angeles is composed of numerous protagonists– groups large and small. Many of these groups have self-organized to build up and defend working-class and poor communities against social cleansing. This panel brings together individuals from several Los Angeles-based anti-gentrification groups. Located in relation to different communities, each participating group has chosen to remain autonomous from the nonprofit-corporate complex. Their strategies and tactics are as diverse as the panelists themselves. The groups share an understanding that gentrification is not natural nor the result of individual greed. Nor are its complexities immune to study or resistance. Chinatown Community for Equitable Development, Defend Boyle Heights, and School of Echoes Los Angeles will discuss their decisions to remain autonomous, their strategies for meeting the scale of the gentrification crisis, and their practices of solidarity. The panel is facilitated by Ultra-red.

Conversation: The Artistic Culture of the Incarcerated
Conversation between Tom Skelly, who developed the award-winning Arts In Corrections program in correctional facilities over the past 30 years; Wayne Kramer, who, upon leaving prison, built the nonprofit, Jail Guitar Doors, an organization that provides music and songwriting workshops to inmates around the country; and Community Resource Manager, Ronnie Shupe, from California Institution for Women, Chino. Skelly, Kramer, and Shupe will discuss the role of art in prisons in relation to improving mental health conditions and providing coping strategies for those incarcerated.

Lecture: Why do People Write and Paint on Walls? Reflections from the War in Northern Ireland
Tony Crowley, professor of English at the University of Leeds, UK, will discuss the specific relations between aesthetics and politics in the murals painted in Northern Ireland from the late 1970s to the present. He will focus on the political motivation that underpins the murals and attempt to analyze why art became such an important medium in the context of a violent conflict.

Panel: immigration | imagination
The immigration | imagination panelists will share their creative, critical, and community practices in response to the policing of borders in the global north and south, and the ongoing vestiges of violence. These artist-activist-teachers speak of their embodied ties to Berlin, the Bay Area, Manila, Boyle Heights, Seoul, and in between. Interwoven topics include post-Chicano/ post-identitarian representation, transnational adoption, incarceration, as well as two print projects: White Gaze, a post-colonial reframing of National Geographic archives, and Myriad Modernities: Southeast Asian Visual Cultures, a special art+academic double issue. The panelists include Michele Carlson, Michelle Dizon, Carlos Jackson, and kate-hers RHEE and is moderated by Việt Lê.

Lecture: Cure Park
Dutch curator, Theo Tegelaers, will discuss his recent project Cure Park, which took place in the Amsterdamse Bos, a park on the outskirts of Amsterdam from June 4 to July 16, 2017. During this expanded exhibition, artists, non-art professionals and the public came together to learn, share knowledge, and engage in different activities in order to examine what it means to take care of yourself, others, and the environment. Projects included Live, Love, Death, alternative therapies for those physically challenged, and radical ideas concerning food production. Ideas discussed among the participants during the five-week outdoor exhibition included: What happens when you give or receive care? What are the conditions and who decides what questions are asked?

Ultra-red, an international sound art collective with research teams based in Los Angeles, New York, Berlin, and across the UK. Founded in 1994 by two AIDS activists, Ultra-red develops and tests listening protocols in the context of political movements.

School of Echoes Los Angeles is a multi-racial and multi-generational autonomous collective of organizers, teachers, and sometimes artists founded in late 2012. With over a dozen members, School of Echoes is a space for reflecting critically on experiences in the movement against gentrification and for the human right to housing.

Chinatown Community for Equitable Development (CCED) builds grassroots power with low-income immigrant communities through organizing, education, and mutual help. CCED is a multi-ethnic intergenerational organization based in Los Angeles Chinatown that organizes closely with working-class tenants to fight against gentrification and to fight for affordable housing and community well-being.

Tom Skelly designed and implemented a multi-disciplinary fine arts program at the Chino Men’s prison. During his 30-year tenure, he developed an award-winning, inmate arts crew that created community beautification projects throughout Southern California while demonstrating a significantly lower rate of recidivism.

Wayne Kramer was not only a leader of Detroit’s incendiary rock band The MC5, he worked for racial and economic equality during the Vietnam War and was a target of the FBI’s counter-intelligence program. After serving a federal prison term, he released 10 solo albums and was named by Rolling Stone as one of the top 100 guitarists of all time. In 2008, he co-founded Jail Guitar Doors with British troubadour Billy Bragg and his wife Margaret Saadi. He lives in Los Angeles with her and his four-year-old son while composing feature films and television programs.

Ronnie Shupe, community resources manager at the California Institution for Women, recruits, coordinates and manages all self-help and religious services programs, including approximately 800 volunteers, contract service providers, staff sponsors, and chaplains. She delivers and promotes rehabilitative services to the incarcerated population and serves as a liaison to staff and the community to rehabilitate offenders.

Robby Herbst is an interdisciplinary artist from Los Angeles. His work engages critically with contemporary and historic models of participation. His 2016 project, New New Games, supported by the Bay Area arts institutions Southern Exposure and the Headlands Center for the Arts, examined the history and influence of the 1970s-era New Games Movement with a publication, discussions, a reunion, and two games festivals.

Carlin Wing is an artist and media theorist whose work aims to connect everyday gestures to global histories by demonstrating how material and symbolic limits are enacted, embodied, and performed. Her current book project, Bounce: A History of Balls, Walls, and Gaming Bodies, follows an array of bouncing balls through the histories of electronic and non-electronic games, across the spectrum of play, game, and sport, and into the domains of physics, material science, animation, and computing.

John Burtle was born in Long Beach, California, in 1985. He likes gardening, swimming, and making art with friends. Recent exhibits include Contacts with Paul Pescador at Lyeberry HQ, and A Performance About Everything, with Guan Rong at PAM. John is a member of Human Resources, Los Angeles.

Elana Mann creates artwork that brings a greater consciousness to the listening and speaking we practice in everyday life. In 2017-18, she was named a Cultural Trailblazer by the City of Los Angeles and is a ceramics artist-in-residence at Pitzer College.

Tony Crowley is chair of English at the University of Leeds and was formerly the HBA chair of the Humanities at Scripps College and honorary professor in the Institute of Irish Studies at the University of Liverpool. An archive of his photographs from Northern Ireland is held in the Claremont Colleges Digital Library, and his most recent publication was The Liverpool English Dictionary (2017).

Michele Carlson is an associate professor in visual and critical studies at the California College of the Arts and the executive director of Daily Serving and Art Practical. She is a practicing artist, writer, and curator whose trans-disciplinary research investigates the intersections of history, power, and visual culture. Carlson is one third of the arts collective, Related Tactics, which entertains diverse projects at the intersection of race, art, and culture.

Michelle Dizon is an artist, filmmaker, writer, theorist, and educator based in Los Angeles. Dizon has exhibited and lectured at venues such as Caixaforum (Barcelona, Spain), Jeu de Paume (Paris, France), and the Yerba Buena Center for the Arts (San Francisco, United States). Dizon is the founder of at land’s edge, an experimental platform for visual research and catalyst for decolonial thought and action. She earned an MFA in art at the University of California, Los Angeles, and a PhD in rhetoric from the University of California, Berkeley.

Carlos Jackson, a visual artist and writer, was born and raised in Los Angeles. He attended the University of California, Davis, where he received an MFA in painting. Currently, he is an associate professor and chair of the Chicana/o Studies Department at UC Davis. In the past five years he had numerous group and solo exhibitions throughout the United States. His books include Chicana and Chicano Art: Protest Arte (2009) and Mi América/My America: Carlos Jackson (2011).

kate-hers RHEE’s interdisciplinary work reflects the complex nature of miscast identity, cultural dislocation, and gendered interactions. She received her BFA from the School of the Art Institute of Chicago and her MFA from the University of California, Irvine. She works in Germany, the United States and South Korea and established her studio in Berlin in 2009. RHEE’s work has been shown nationally and internationally with recent exhibitions and interactive projects at the British Museum – London (2016), Asian Art Museum – Berlin (2016-2017).

Việt Lê is an artist, writer, and curator whose work focuses on trauma, modernity, and popular cultures in Southeast Asian diasporas. He is assistant professor in visual studies at the California College of the Arts. His art and research has been featured at H Gallery Bangkok, the Shanghai Biennial, and the Smithsonian.

Theo Tegelaers is a founder and curator at TAAK, Amsterdam. Previously he was senior curator at SKOR (Art and Public Space Foundation), Amsterdam, from 2012-16; acting director at De Appel from 2005 to 2006; curator of contemporary art program for the Rijksmuseum from 2005 to 2012; curator in residence at the International Studio and Curatorial Program in New York in 2000; and director at W139 from 1994 to 1998.