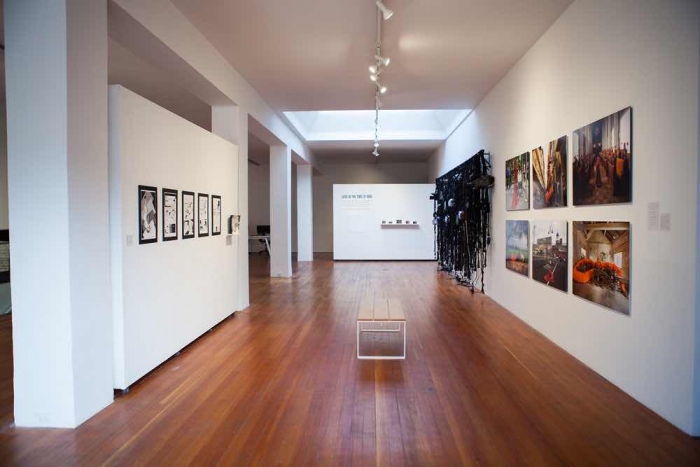 Love in the Time of War, Installation Image

The Vietnam War may have ended on April 30, 1975, but that is the American point of view, as was the name.

The American War, as the Vietnamese call it, is in some ways never-ending, and that is the point of view presented in Love in the Time of War, at SF Camerawork on Market Street. The group show uses the 40th anniversary of the ceasefire as a launch pad to explore all of the ways that the war is still being fought in Cambodia, Paris, Hanoi, Los Angeles and places in between.

“Our exhibit asks, ‘How do we respond with love and compassion amidst overwhelming chaos?’” explains the show’s co-curator, Viet Le, 39, an assistant professor of visual studies at California College of the Arts.

Le, who arrived in California as a refugee on his fourth birthday, organized the show with Jennifer Vanderpool, who teaches at UC Santa Barbara. Together they assembled a dozen artists representing the countries President Richard Nixon bombed — Vietnam, Laos and Cambodia — along with Oakland, New York and the Netherlands.

They range from Los Angeles artist Bruce Yonemoto, a Japanese American born in 1949 and old enough to remember the draft, to Vuth Lyno, a Cambodian born in 1982.

There is an undercurrent of violence and sexuality to the show, but nothing overt. SF Camerawork has huge picture windows overlooking Market Street, and one of the images in Love in the Time of War is striking from the street below: It is of a Muslim woman fully shrouded in a sparkling red chador, surrounded by American flags.

Follow that to the big red SF Camerawork door and up the stairs to see images of folded letters. These were written in English to a daughter in the United States, from a Cambodian man being held captive.

As you enter the gallery, at the top of the stairs you are confronted with a wall of cameras shooting video of your entry. These are instantly translated to video screens in a piece called “1984.”

There are also portraits of military officers in Hanoi. On the opposite wall are images of a giant red centipede, called “The Buddhist Bug,” by Anida Yoeu Ali, who is a first-generation “Muslim Khmer.” There are even some lyrics by Pat Benatar hidden in the wall text.

Taken together, Love in the Time of War amounts to “powerful new work from an exciting group of international artists that can’t be seen anywhere else in the Bay Area,” says Heather Snider, executive director of SF Camerawork.

The exhibit closes Oct. 15, with a site-specific performance of “Red Chador,” by Ali, who will be traveling from Cambodia.

In Love in the Time of War at SF Camerawork, curators Việt Lê and Jennifer Vanderpool shrewdly present an eclectic mix of artists that subvert the ways that love and war police bodies. The exhibition presents many artists who engage in portraiture to explore the complexities of their own identities or those of their communities. With the show featuring many strong works, Anida Yoeu Ali and Bruce Yonemoto’s offerings stand out with their use of costume and photography, which humorously and beautifully disrupt presumptions about love, war, and otherness.

In a gridded installation of six photographs, Ali draws upon her mixed Buddhist and Islamic heritages with selections from two projects: The Buddhist Bug (2012–14) and Red Chador (2015–15). For The Buddhist Bug, Ali reimagines the saffron Buddhist robe as a giant orange bug costume with a wire armature and nylon skein. As the costume envelops Ali’s body, her face pokes out at one end while a pair of feet protrude out the other. In Red Chador, Ali appears in a red sequined Islamic headscarf, a chador, that extending beyond merely covering her hair to completely covering her face and body, exposing only her hands. While both costumes veil her body, their bold colors and striking forms also announce her body and the ideological battles over religion, ethnicity, and gender.

With Ali’s costume for The Buddhist Bug extending up to about 130 feet, even when coiled up her large and striking costume commands space. As Ali sits neatly curled-up behind a farmer’s cart she still dominates the landscape. In another image, Ali actually becomes architecturally large as she sits intertwined in a three-story spiral staircase. In both photographs Ali represents a humorous and generous presences to rural farmers and urban-dwellers where her physical size may represent the role of religion in some people’s lives and worldviews.

In Ali’s Red Chador series, one image depicts her praying towards Mecca with a blue onion-bulb dome in the background. While these domes are an architectural motif of Eastern Orthodox churches, this one in sits atop the Colt Armory (Hartford, Connecticut), where they manufacture guns, including the 1873 Single Action Army—colloquially named the “Peacemaker”—that is said to have “won the west.” Ali’s simple and pious gestures resonates off its context to question the symbolic and tactical incongruities of religion and war and possibly the continued battles that the West engages. 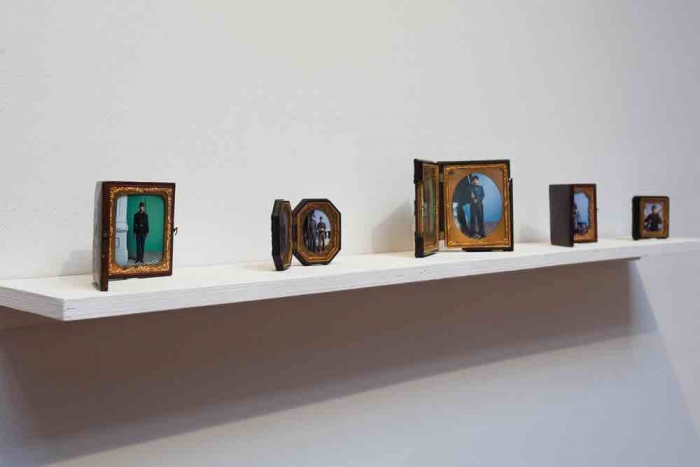 In Yonemoto’s NSEW (North South East West) (2007), the artist subtly disrupts imagery of love and war with a small series of c-print portraits of Asian men in Civil War costumes. While the Civil War is largely considered a battle between North and South, Yonemoto’s title includes East and West to acknowledge the largely ignored history of Asian men who served on both sides of the Civil War.

For this project, Yonemoto rented uniforms from the company Western Costume, who provided costumes for Hollywood films from the beginning of American cinema, including those used in D.W. Griffith’s deeply problematic Civil War narrative, Birth of A Nation (1915). Yonemoto pairs these costumes with simplistic classical doric columns and balustrades in the backgrounds, alluding to the simplistic set-like quality of early portrait photographs, film, and theater. As Yonemoto suggests the roles we all play, he also alludes to the power and sometimes troubling history of cinema and photography in constructing or reflecting narratives regarding our identities, individual or national.

By displaying his small photographs in wood and brass daguerreotype cases, Yonemoto’s project suggests the intimacy of portraiture. During the Civil War many Americans lost loved ones and photography was still an occasion that required a visit to a portrait studio. As an Asian man, Yonemoto’s images query the nature of who cherish/ed these these men. Are these portraits of loved ones, familial or romantic, or for the larger society to honor the unrecognized service of these men?

Love in a Time of War demonstrates that as love and war police bodies, there’s code-breaking and brinksmanship. The show is abound with subtle insertions and unknown histories, as well as humor and beauty. As Ali and Yonemoto engage in role-playing or performative actions, the body becomes a site of critique. The exhibition promises to richly unfold with off-site screenings of Trinh T. Minh-ha Forgetting Vietnam (2015), a closing panel discussion and performance by Ali, and several other web-based projects.

Love in the Time of War Screening

Trinh T. Minh-ha's Forgetting Vietnam was screened off-site at the New Parkway Theater in Oakland on September 16th and at California College of Art's Timken Hall on September 22nd. Shot in Hi-8 video in 1995 and HD and SD in 2012, the film explores Vietnam's geo-political situation by examining land and water relation to Vietnamese history and culture. Touching on a trauma of international scale, Forgetting Vietnam was made in commemoration of the 40th anniversary of the end of the Vietnam War and its survivors. 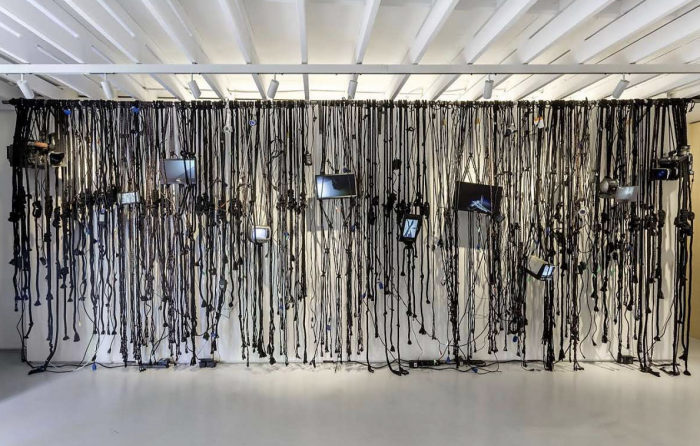 Love in the Time of War Panels